Nature, Culture, and History at the Grand Canyon

The Grand Canyon is one of the most identifiable and remarkable landscapes on earth and the most internationally recognized symbol of nature in North America.  But this oversized natural wonder is much more than a sight to behold. It is a cultural landscape that has been lived in, traveled through, feared, marveled at, exploited for profit, utilized for education, and praised as inspiration by a diverse array of people over a very long time. Welcome to the Grand Canyon

This unique place has influenced American science, art, environmental values, popular culture, tourism, and leisure.  It provided life and salt for Native Americans, thwarted early Spanish explorers, confounded prospectors and evoked poetry from the pens of scientists. From the early travelers to today’s five million annual visitors, everyone reacts differently – but everyone reacts.  As these reactions have been captured in oral histories, books, photographs, paintings, poetry, news articles, and movies, the relationship between people and place in this iconic American landscape has grown to shape our nation’s history and values.

One of Earth’s few natural landmarks visible from space, the massive rift carved by the Colorado River begins just south of Utah at Lee’s Ferry and curves with the river through 277 miles of Arizona toward the California border, brushing Nevada along the way. At places, it is 15 miles wide (it averages 10), and its depth reaches a mile, cutting through rock formed two billion years ago. We call it, quite simply, the Grand Canyon, but there is nothing simple about this enormous landscape.

For many people, the phrase “Grand Canyon” immediately conjures a national park. Formally dedicated in 1919, Grand Canyon National Park covers 1,904 square miles (just 50 square miles fewer than Delaware) and encompasses many of the most beautiful vistas of the region, but it does not surround the entire geologic feature known as the Grand Canyon, which actually begins east of the park and continues on for many miles beyond it to the west. In other words, the Grand Canyon contains the park, but the park does not contain the Grand Canyon. 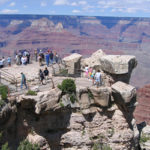 Read about the historic Kolb Brothers photography studio as well as other stories about sites and people at Grand Canyon. 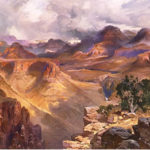 Indigenous peoples have used Grand Canyon for thousands of years. In the late nineteenth century, EuroAmericans began visiting and living there. Read about the ways nature and culture interacted over time. 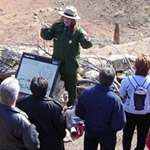 For students and teachers who can’t make the trip to the National Park, the Grand Canyon Association provides “travelin’ trunks” of educational materials. This site also provides useful links for instructors. 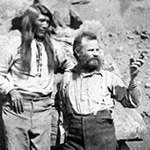 In this 1873 photo, Tau-Gu, chief of the Paiutes, meets with Colorado River explorer Maj. John Wesley Powell near the Virgin River. Search our digital archives for photographs, postcards, maps and more.

This site is part of a multi-media educational project, “Nature, Culture, and History at the Grand Canyon,” that includes a digital audio-tour, walking tour brochure, and Travelin’ Trunks for K-20 teachers. This project is supported in part by a grant from the National Endowment for the Humanities. Additional funding provided by Arizona State University, the Grand Canyon Association, and the Helios Education Foundation/William C. Jenkins History Fund.

This audio tour of Grand Canyon sites and stories was produced in 2008 by AudioLandscapes of Portland, OR, for Tour-Mate Systems in partnership with the Grand Canyon Association and Arizona State University. Music copyright 2008 by Scott August. Supported in part by a grant from the National Endowment for the Humanities. Segments of the audio tour are scattered throughout this website. Look for the audio ranger and click play to listen. Click the audio ranger icon to purchase the whole tour.

We welcome comments and suggestions – email them to asugcnp@gmail.com or visit the contact page. For a staff listing, click on “About” in the menu above.