This cache of pottery found near Boucher Trail is among the many sites with relics left behind by people who lived in the Grand Canyon centuries ago. Archaeologists have recorded more than 4,300 places in the Grand Canyon where they found evidence of prehistoric human use.

Although first-time visitors to the Grand Canyon may wonder how anyone ever risked the first foray into its depths, the geography of the gorge did not dissuade prehistoric people. The vertical walls and projecting plateaus have a rich human history dating back to the Ice Age, a time when large mammals still foraged on the North American continent. During what scientists term the Pleistocene era (9,500 B.C. to 6,500 B.C.), Paleo-Indians fashioned large stone spearheads to hunt mammoths, giant sloths and other large game. Across the larger Colorado Plateau, archaeologists have found ample evidence of such early human occupation. In the Grand Canyon, only a few spear points are left to tell us of those early hunters, but the clues that survived give us a good idea of what occurred.

Roughly 11,000 years ago, the earth’s climate warmed – glaciers melted and weather systems changed. Over time, the large Pleistocene mammals disappeared, forcing humans to adapt their hunting practices – and tools – to smaller game such as bighorn sheep and deer. This human history was not recorded in books. Rather, it has been pieced together by archaeologists and paleoanthropologists studying those remnants that survived the millenniums – large spear points gave way to smaller ones and finally to arrow points to correspond with the smaller game animals. As time wore on, clues left behind by humans in the Grand Canyon accumulated.

Civilian Conservation Corps workers in 1933 discovered small split-twig figurines in a Grand Canyon cave. Since then, hundreds of similar figurines, shaped like deer or bighorn sheep, were found in ten caves in the Grand Canyon as well as in seven caves from Utah to California. Radiocarbon dating tells us they were made between 2000 and 1000 B.C., which puts them in what archaeologists call the Archaic Period (6500 B.C. to 300 A.D). In the Grand Canyon, indigenous people left the figurines in caves on the north walls in the Redwall Limestone cliffs strata. Because the caves are hard to reach and show no evidence that they were living quarters, anthropologists believe that the figurines were part of a ritual. Perhaps these Archaic hunters created the figurines and carried them to the caves as a way to ensure a successful hunt.

The figurines the Archaic people left were all made in the same pattern, usually from split willow branches but sometimes cottonwood or other materials. They fit in the palm of a hand, and whoever left them put them in shallow holes and covered them with rocks. Some of the animal figurines had been “speared” through the chest with a sharpened twig. These twig figurines are among hundreds found in the Grand Canyon since 1933.

The Archaic people were semi-nomadic, living in small groups and moving with the seasons up and down the canyon levels. They collected wild fruits and seeds, hunted bighorn sheep and deer by following the game trails traversing the canyon walls from the rim to the Colorado River. Those trails extended as trade routes beyond the Grand Canyon. Pictographs on a Grand Canyon wall.

One expansive overhang of red rock features a large panel of life-size pictographs of varying colors. Anthropologists have dated the work to the Archaic Period, but it is possible that some of the paintings were done earlier. A close examination of the pictographs reveals layers of pigments possibly added over thousands of years.

Alert hikers going up Bright Angel Trail can spot petroglyphs on the wall beneath the south rim. Those petroglyphs are evidence of Archaic people spending time near Indian Garden.
Such “rock art,” as it is commonly called, is an important cultural resource in the Grand Canyon. Hikers finding pictographs or petroglyphs – designs carved into the rock – are welcome to take photos but should resist the urge to touch. The ancient paintings are cultural artifacts – any modern additions are vandalism.

People curious about ancient Grand Canyon dwellers have spent much time trying to understand the meanings behind petroglyphs and pictographs. There is no consensus really on what the images mean, though throughout the Colorado Plateau there are recurring images that tantalize modern imaginations.

Human encounters with the Grand Canyon extend beyond the pragmatic land uses such as farming, hunting and water supplies. Just as modern-day visitors react in awe at the grandeur, many indigenous people who lived in or passed through this majestic place attached deep spiritual significance to the land. One of the ways in which we trace Native American links to the Grand Canyon is through creation stories and other legends that have been carried down for centuries. Though the Hopi, Zuni, Paiutes and others no longer live within the national park, the Canyon’s influence on their cultures remains strong. 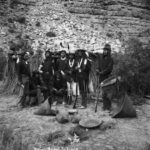 Havasupais pose in 1883 for a photo by Ben Wittick. Photo courtesy of Library of Congress, Ben Wittick Collection.

References: Hirst, Stephen. I Am the Grand Canyon. Grand Canyon Association for the Havasupai Tribe, 2006. 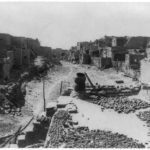 The Hopi village of Oraibi is considered the oldest continually inhabited community in the United States. This photo was taken between 1872 and 1881. Photo by John K. Hillers, courtesy of Library of Congress 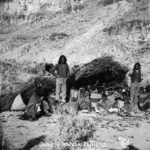 A group of Hualapais, or People of the Tall Pines, living in the Grand Canyon in 1883. The mixing of cultures is evident in the Western clothing of the men, set against the traditional blankets and brush shelter. Photo by Ben Wittick, courtesy of Western History/Genealogy Department, Denver Public Library.

Today the Hualapai Nation covers about one million acres, with 108 miles of Colorado River frontage extending from Lake Mead in the west to the boundary of the Havasupai Reservation in the east. The... 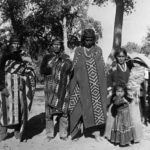 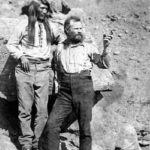 Tau-Gu, a head man of the Paiutes, with John Wesley Powell overlooking the Virgin River that now flows into Lake Mead. Circa 1873. Photo: GRCA # 13806. 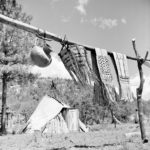 Some examples of the intricate arts and crafts of the White Mountain Apache, including pottery, beadwork, textiles and basketry, are displayed in front of a traditional dwelling, or wickiup. Photo: NAU Cline Library, Tad Nichols Collection, NAU.PH.99.3.5.10.10 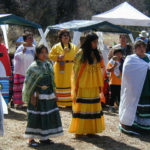 Conditions were terrible on the reservation, with widespread starvation and disease. In 1875, the Yavapais, Apaches, and all others on their reservation, about 1,700 people, were forcibly removed, compelled to march through harsh winter... 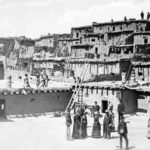 Click on one of the tribal names below to learn more about that tribe’s history and relationship with the Grand Canyon.